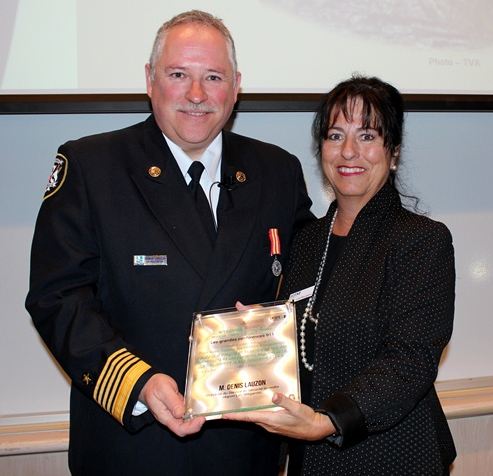 La Cité, the college of applied arts and technology, is presenting the first edition of its public 911 conferences, with 6 distinguished speakers, and is handing out the Resilience Award to two recipients.

Ottawa, Friday, March 14, 2014 – The Institute of Legal and Emergency Services of La Cité kicked off its first public 911 conference yesterday with a series of presentations on the theme “Dealing with a Major Incident: a 3D View”. It also announced the creation of the Resilience Award. The Award recognizes the contribution of important actors in the field of emergency services and security who, in the course of duty, embody the values of the College. This first edition of the Award was presented to two highly deserving recipients.

Gaétan Drouin and Denis Lauzon, respectively heads of the City of Sherbrooke Fire & Rescue and Lac-Mégantic Region Fire & Rescue, received the award for their heroic actions during the events of Lac-Mégantic. Mr. Lauzon also gave presentation on the morning of the 911 conference, describing what they experienced in the hours and days following the July 2013 railway disaster.

« La Cité is delighted to present the first Resilience Award to two individuals who, with their courage and dedication, so nobly embody the values of our College, namely excellence, boldness, integrity and confidence. Mr. Drouin and Mr. Lauzon fully deserve this honour,” declared Lise Bourgeois, President of La Cité. “What a wonderful opportunity this was for our students, teachers and guests to be able to attend Mr. Lauzon’s presentation, and also the presentations of our other outstanding speakers!”

Students at La Cité who are studying emergency and legal services are of course able to enjoy the leading-edge technology of the 911 Institute’s facilities, a training centre to which none other compares in North America.

As the flagship institution of French-language college education in Ontario, La Cité puts the success of its students first and foremost, offering them facilities with leading-edge technology and a learning environment focused on practical, modern, forward-looking experiential learning practices. Graduates of the College are recognized as skilled, committed and creative professionals who can contribute to economic, social and cultural development in Ontario, Canada and elsewhere.