The CUSU Oxbridge Careers Handbook – Strategies for Success is a voluminous annual publication designed to help graduates make the transition to the job market. One section that readers are particularly fond of profiles postsecondary educational institutions whose track record in this area is particularly impressive.

This year, La Cité is one of some thirty institutions selected by this venerable British institution from around the world. Ontario’s only postsecondary institution to appear on the hot list, it is also the only college-level institution, on a Canadian and International scene, to make the cut.

In addition to mentioning the diversity of programs and services offered by La Cité—including the program leading to a bachelor’s in biotechnology—the 2013 edition of the celebrated Handbook emphasizes other outstanding features of the Collège : the practical nature of training, the relevance of experiential learning, and the specific measures adopted to help students with special needs.

Lise Bourgeois, President of the Collège, put it this way: “On the eve of its 25th anniversary, and with a redesigned visual identity, La Cité fully intends to keep building on its many successes, in particular by implementing VISION 2018, its new strategic plan.”

And she added : “For the Board of Directors, students, teaching staff, other employees, partners and the community as a whole, La Cité is, more than ever, a key player in the postsecondary system, dedicated serving Francophones in Ontario, in the rest of Canada and throughout the world. This recognition on the part of one of the world’s most prestigious universities confirms the fact that we too are playing with the big boys! ”

The Board of Directors of La Cité collégiale, at its meeting of December 9, 2013, offered its sincere congratulations to Lise Bourgeois, President of La Cité, under whose leadership our Collège has achieved international recognition as a top educational institution, being selected for the Strategies for Success list of the Cambridge University Student Union. This important and prestigious honour is a mark of excellence for La Cité worthy of its motto, “The Francophone leader in education, La Cité is the Collège of Success. ” 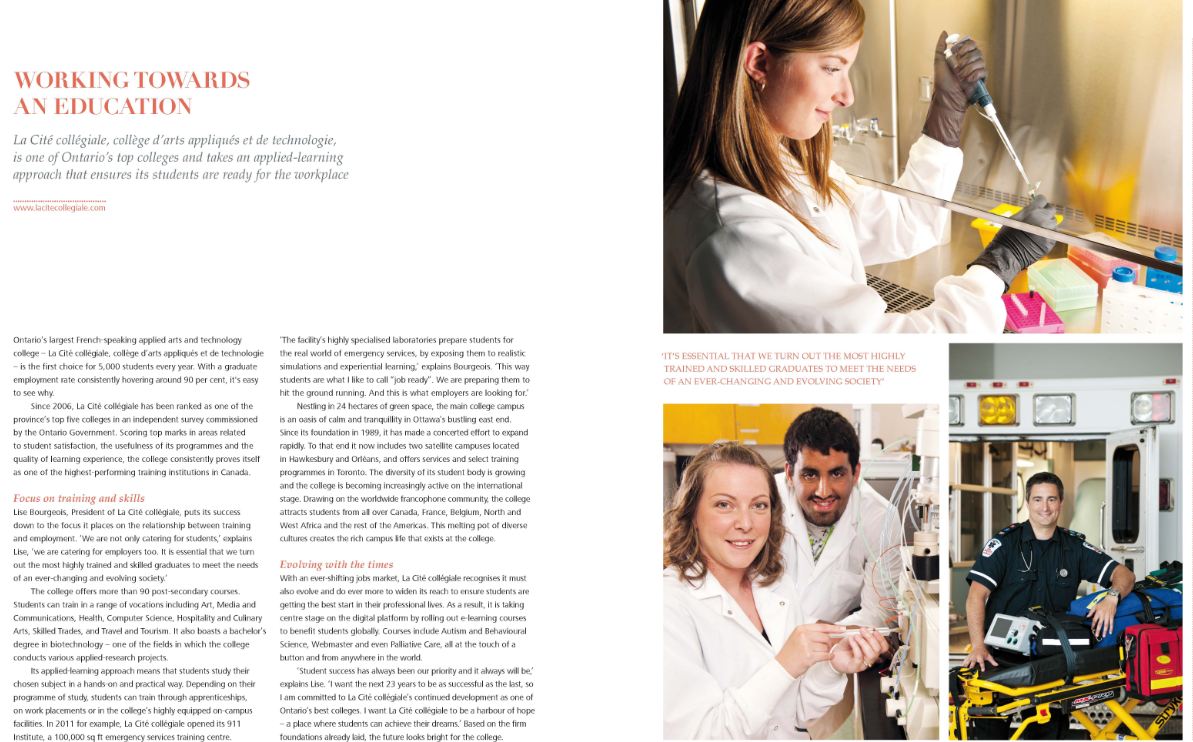 As the flagship college-level French-language educational institution in Ontario, La Cité puts the success of its students first and foremost, offering them facilities with leading-edge technology and a learning environment focused on practical, modern, forward-looking experiential learning practices. Graduates of the Collège are recognized as skilled, committed and creative professionals who can contribute to economic, social and cultural development in Ontario, Canada and elsewhere.